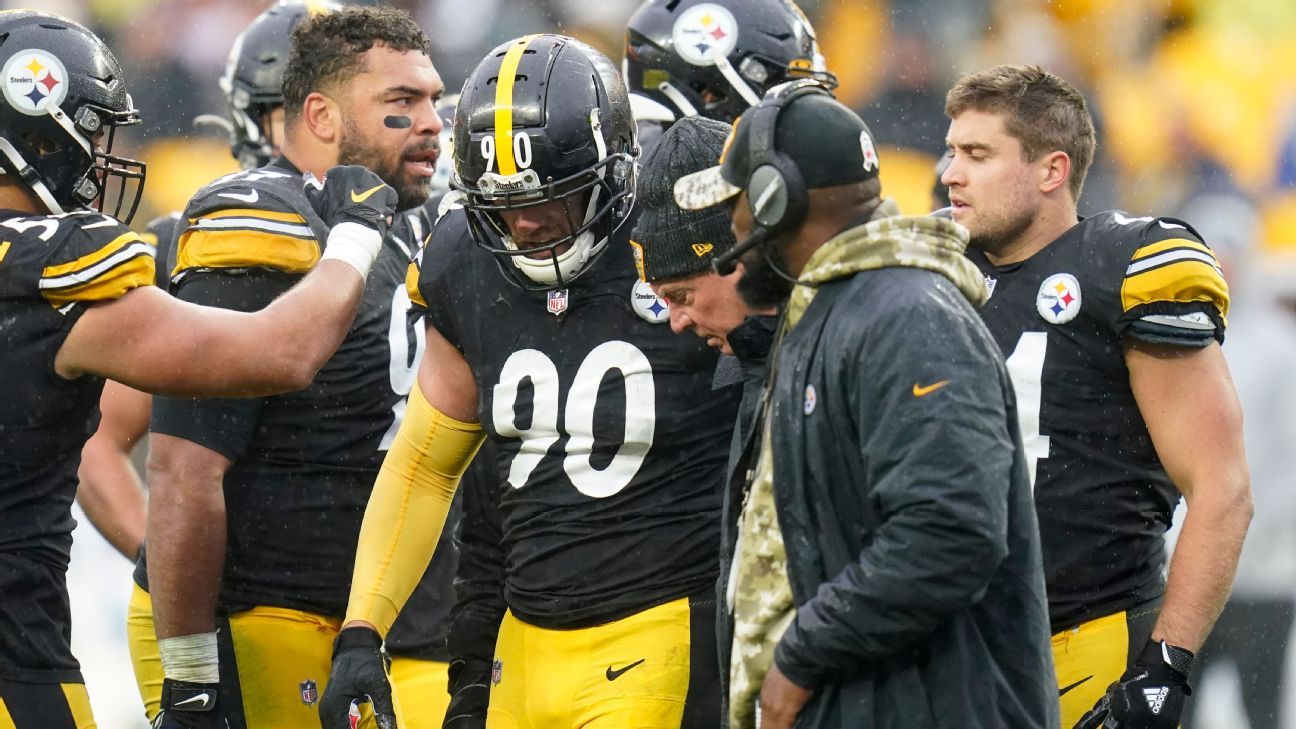 With seven more weeks left on the regular-season schedule, teams are preparing for the final stretch. Injuries have played a huge factor this season, and clubs are monitoring their injury reports heading into the weekend.

Green Bay Packers running back Aaron Jones could miss a week or two because of an MCL sprain, a tough blow for their offense. Meanwhile, New Orleans Saints running back Alvin Kamara has been ruled out for Sunday’s game at the Philadelphia Eagles. Kamara also missed Week 10 with a knee injury.

On the bright side, the New York Giants saw Saquon Barkley return to practice this week after missing over a month with an ankle sprain. He has a chance to play on Monday Night Football against the Tampa Bay Buccaneers. Likewise, Kyler Murray says he’s “pretty close” to returning for the Arizona Cardinals after missing the past two contests with an ankle injury.

Before the action kicks off, our NFL reporters have you covered with the latest injury developments to big-name players:

Injury: Thigh
The Ravens listed a season-worst 13 players on their injury report, but the good news is Brown looks ready to play. He was sidelined for two days, but he returned Friday and ran very well. Brown could be in store for a big game against the Chicago Bears, who have allowed the sixth-most passing yards to wide receivers and the fifth-most touchdown passes to them. In what has been a breakout season, Brown is one of three NFL players with at least 50 receptions, 700 receiving yards and six touchdown catches this season (Cooper Kupp and Tyreek Hill are the others). — Jamison Hensley

Injury: Hamstring
Edmunds suffered a hamstring injury during the team’s loss to the Jacksonville Jaguars. He missed last week’s game against the New York Jets and had only limited participation in practice on Friday. A.J. Klein started at middle linebacker in his place and is set to do the same if Edmunds can’t go. Klein played well in his absence, finishing with seven tackles and a pass defensed. Edmunds is officially questionable for Sunday’s game against the Indianapolis Colts. — Alaina Getzenberg

Injury: COVID
Cooper will miss the next two games after testing positive for COVID, which will have a big impact on the Cowboys’ offense but perhaps not as limiting as many would think. Michael Gallup returned to the lineup last week after missing seven games with a calf strain. CeeDee Lamb leads the Cowboys in receptions, yards and touchdowns. Cedrick Wilson filled in ably for Gallup as the No. 3 receiver and Noah Brown and Malik Turner have had good moments this season. Cooper can make big plays at a moment’s notice, but Dak Prescott has shown he is not afraid to go to any of his receivers in a critical moment. — Todd Archer

Injury: Oblique
Goff has missed three straight practices ahead of Sunday’s game against the Cleveland Browns. Goff didn’t practice again on Friday — he is listed as doubtful — with backup Tim Boyle taking first-team reps throughout the week. Boyle is in line to take over the starting role in Goff’s absence for the first time of his career. — Eric Woodyard

Injury: Knee
Ingold suffered an ACL injury on a noncontact play Sunday night against the Kansas City Chiefs, and his loss will be felt not only as a short-yardage back, but also catching passes in the flat and as a team captain. Backup tight end Foster Moreau received some reps at fullback against the Chiefs, but he’s a pass-catcher. Ingold is expected to go on season-ending IR, and the Raiders signed fullback Sutton Smith to the practice squad this week. — Paul Gutierrez

Injury: Shoulder
Joseph has been battling a shoulder injury that kept him out of practice Wednesday and Thursday. Even though the Friday injury report listed him as doubtful, he has a chance to play Sunday and will be evaluated pre-game. — Shelley Smith

Injury: Quad
Wilkins has been one of Miami’s best defensive players this season and is effective against both the run and the pass. He missed practice Wednesday before returning in limited fashion on Thursday, and coach Brian Flores says he is hopeful Wilkins can play Sunday against the Jets. If he is unable to go, perhaps the Dolphins will call up recent practice squad signee Andrew Billings. — Marcel Louis-Jacques

Injury: Knee
Kamara will obviously be missed for a Saints offense that was already depleted when he was healthy. He leads the team with 840 yards from scrimmage, seven touchdowns and 32 receptions this season. The one saving grace is that they have a reliable backup option in Mark Ingram II, who should play a huge role for them again as a runner, pass catcher and pass protector. Ingram had 18 touches for 108 yards and a touchdown in Kamara’s place during last Sunday’s loss at Tennessee.

Injury: Knee, shoulder
Armstead will miss the second straight week — a significant loss for a depleted Saints offense that will also be without standout RT Ryan Ramczyk, Kamara and others. Veteran James Hurst has been a reliable replacement for Armstead when he has missed time this year. But now that they also need to replace Ramczyk, they could have to shuffle players around and use either rookie Landon Young or veteran Jordan Mills at one of the two tackle spots.

Injury: Knee
Ramczyk would be a significant loss anytime. But the timing is especially rough for the Saints, considering Armstead has also been ruled out for the second straight week (not to mention Kamara for a depleted Saints offense). The Saints will have to use Hurst, Young or Mills to fill this spot. — Mike Triplett

Injury: Hamstring
Peterson was designated for return and went through three days of practice after a three-week stint on injured reserve due to a hamstring injury. Coach Mike Zimmer said he was not sure whether Peterson would play against Green Bay, but it’s a good sign that he was not on the final injury report. — Courtney Cronin

Injury: Hip, knee
Watt got injured in a fourth-quarter sack of Jared Goff and missed the rest of the tie against the Lions last week. Though MRIs on the injury came back negative, per ESPN’s Adam Schefter, Watt was still unable to practice this week. He’s just one player on a defense that will be without other All-Pros in safety Minkah Fitzpatrick (COVID-19) and cornerback Joe Haden (foot). — Brooke Pryor

Injury: Finger, ribs
After having a procedure to fix the fractured finger on his right hand, the Niners hoped Mitchell would be able to play against the Jaguars on Sunday. But as the week went on, that possibility seemed to dwindle. Now, Mitchell is listed as doubtful and looks unlikely to play. That’s a shame for the Niners given Mitchell’s ascent, but they are in a bit better spot now because veteran Jeff Wilson Jr. is back and available. Wilson is likely to start for Mitchell, with Trey Sermon serving as backup in part because fellow running back JaMycal Hasty is out with an ankle injury. — Nick Wagoner

Injury: Groin
The Seahawks won’t have to face star receiver DeAndre Hopkins on Sunday, but they could be without Pro Bowl safety Jamal Adams when they host the division-leading Cardinals. Pete Carroll said Adams, listed as questionable, will be a game-time decision after tweaking his groin in practice this week. Adams showed up on Thursday’s injury report as limited and didn’t practice Friday. Cornerback D.J. Reed will also be a game-time decision. “We don’t know enough about it yet, so we’ve got to wait and use every day,” Carroll said of Adams and Reed. “They’re hopeful that they’re going to be alright.” — Brady Henderson

Injury: Groin
For the first time since Week 5, Samuel hasn’t already been ruled out on a Friday for the ensuing game. Instead, he’s listed as questionable. He hasn’t played since lasting only two snaps in a Week 5 loss to New Orleans and it’s still hard to imagine him playing. He did participate in positional warm-up drills Friday for the first time in a while but still retreated to a side field during the team portion of practice. It’s progress, but given the stops and starts to his season, it’s hard to know exactly how much. — John Keim

New Zealand’s Ajaz Patel 3rd Bowler To Take 10 Wickets In An Innings In Test Cricket History
Sean O’Malley: I’m the ‘unranked champ’ of the UFC
After Davis and Haney failed to produce spectacular results, what comes next at lightweight?
“Need To Have More Clarity”: Virat Kohli On India’s Omicron-Hit Tour Of South Africa
Ronaldo proves worth to Rangnick on record night