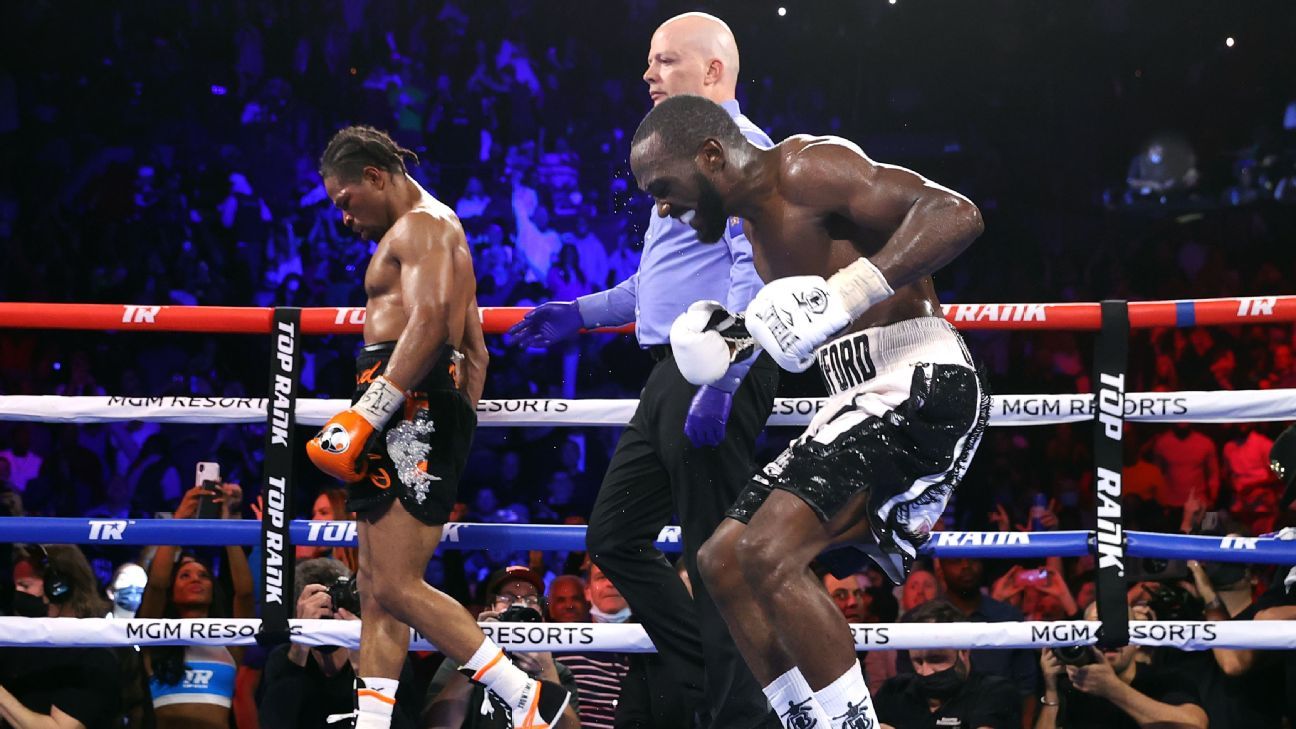 LAS VEGAS – Terence Crawford waited a few seconds for the moment to sink in before he jumped up and down in front of a sold-out crowd.

For years, the undefeated WBO welterweight champion and one of boxing’s top pound-for-pound fighters lacked the big win against a fellow 147-pounder. But on Saturday night, Crawford didn’t just get a victory.

In his toughest test in years, Crawford used a couple of big punches to stop former champion Shawn Porter in the 10th round to retain his world title at the Michelob ULTRA Arena at Mandalay Bay.

The question Crawford asked in his post-fight interview was rhetorical and underscored the importance of the outcome and what it means for him and boxing at large.

“Who’s No. 1 in the welterweight division now?” Crawford asked, a question answered with roars from the 11,568 in attendance, many who cheered loudest for Crawford.

It’s been the biggest question in the sport for several years, since Floyd Mayweather retired and the void was filled by two men — Crawford and the undefeated Errol Spence Jr., who previously beat Porter and was in attendance for Crawford’s win.

Many have cited boxing’s politics — Crawford has been aligned with Top Rank Promotions and Spence with Premier Boxing Champions — as a reason the fight hasn’t been made yet. And during Crawford’s reign as a welterweight champion, he lacked the big wins on his resume with the top competition fighting under the PBC umbrella.

That’s what made Saturday night so important. Porter, who fights for PBC, represented Crawford’s biggest test as a welterweight.

In lieu of an actual fight between Crawford and Spence, Porter — now a common opponent between Spence and Crawford — serves as the best barometer to see how that fight might play out. And Porter gave a pretty clear answer in his post-fight interview.

During the press conference after the fight, Porter (31-4-1, 17 KOs) wore thin-rimmed, black sunglasses in an orange and black tracksuit, and reaffirmed that statement.

Meanwhile, the cold war between Crawford and Spence continued to stew afterwards. Spence was shown on the arena big screen and was lustily booed by the pro-Crawford crowd. Moments after the fight ended, Spence quickly made his way out of the arena without a comment, and later sent out a tweet.

Top Rank founder Bob Arum fielded questions about the viability of the Crawford-Spence fight that people have wanted for years.

Arum, essentially, shot it down, much like Crawford has done for months, if not years. And Arum floated another potential option — undisputed junior welterweight champion Josh Taylor, who was in attendance to see Crawford defend his welterweight title, and who also happens to hold all four belts in the 140-pound division.

The Top Rank chief said a potential Crawford-Taylor fight could be more lucrative than Crawford-Spence because of the Scotland native’s appeal in the United Kingdom and the ability to boost pay-per-view buys across two continents.

Everything could be contingent on what happens with Crawford’s promotional arrangement, though. His deal with Top Rank is up, and it doesn’t appear he’s coming back.

“I’m pretty sure my decision is made already. Bob couldn’t secure me the Spence fight when I was with him, so how would he secure the fight when I’m not with him? I’m moving forward with my career right now and I wish everybody the best,” Crawford said, sitting next to Arum during the post-fight news conference.

What exactly happens next is still unclear. But Crawford left no debate about where he currently stands.

As he fought and dispatched lesser opponents, Crawford believed that he was the best fighter in his weight class. Porter gave Crawford the opportunity he needed to prove it.