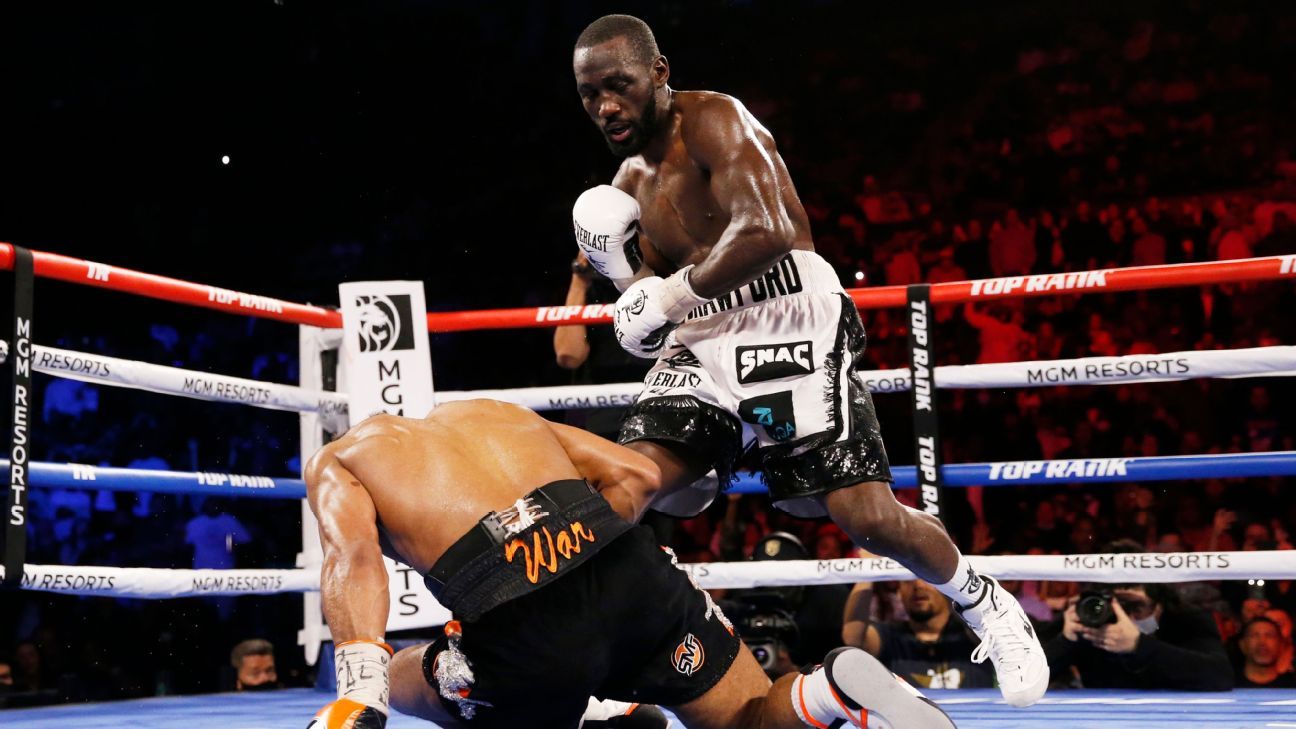 LAS VEGAS — Terence Crawford jumped up and down in jubilation. Or maybe it was an exorcism. For years, he has been hounded by questions surrounding his résumé. No more.

Crawford notched the biggest win of his career on Saturday at Michelob Ultra Arena at Mandalay Bay with a 10th-round TKO victory over Shawn Porter to retain his WBO welterweight title.

The finish came at 1 minute, 21 seconds and marked the first time in Porter’s career that he has been stopped.

Crawford (38-0, 29 KOs) made his fifth consecutive title defense, but it didn’t come easy — far from it. Porter (31-4-1, 17 KOs) applied relentless pressure in a rugged, tit-for-tat battle before Crawford scored two knockdowns in Round 10, leading Porter’s father and trainer, Kenny Porter, to throw in the towel.

Crawford’s first knockdown resulted from a counter left cross to the face as Porter swung wildly. Moments later, a barrage of punches punctuated by a right hook sent Porter to the canvas again before his father jumped up in the corner to grab the ref’s attention.

Errol Spence Jr., ESPN’s No. 1 welterweight, was ringside, a prelude, fans hope, to an eventual meeting with Crawford. The matchup remains one of the biggest that can be made in boxing and would determine the best 147-pounder in the world.

“You see what I did compared to what he did,” Crawford said, referring to Spence’s split-decision victory over Porter in September 2019. “Who’s No. 1 in the welterweight division now? You know who I want. I’ve been calling him out all day. Maybe Spence will get his tail out of his butt and fight me.”

Now that Spence is cleared to train following surgery to repair a detached retina, there’s hope the bout will materialize next year. In the meantime, Crawford, 34, made a statement with a stoppage of a durable fighter and cemented his status as boxing’s best finisher.

He has knocked out nine consecutive opponents. The previous eight weren’t close to Porter’s level. The last opponent to go the 12-round distance, Viktor Postol, doubles as Crawford’s best previous foe, but that decision win for Crawford came at 140 pounds.

At 147 pounds, where Crawford is ranked No. 2 by ESPN, his résumé was severely lacking. Enter Porter, a measuring stick whose other two defeats came via narrow decision against prime versions of Kell Brook and Keith Thurman.

And until Round 10 on Saturday night, it appeared this fight was headed for a similar fate. Porter used foot feints and upper-body movement in an attempt to confuse Crawford and set up his attack.

Porter, 34, unleashed punches in barrages, usually followed by a few forearms as he pushed Crawford to the ropes. Crawford backpedaled, looking to create separation for his counter shots, and as the rounds wore on, he started to find his mark more and more.

But Porter wasn’t deterred. He continued to press forward and connected on several hard shots, particularly looping rights that he fired repeatedly. Porter never appeared to tire, and he was squarely in the fight when he was abruptly floored by Crawford in the 10th.

“He’s the best out of everybody I have been in the ring with,” said Porter, who was guaranteed $4 million. “He was on point, A-Z, and he was that good that I would want to do it again.”

Added Porter’s father: “He didn’t prepare like I wanted him to prepare. He fought a great fighter, [but] it was like fighting him blindfolded. When guys get to certain levels, they believe they know what they are doing. Shawn was hurt. [Crawford’s] a sharp fighter, and my kid was at a deficit and I couldn’t let it go on.”

If Porter lasted just a few more minutes, a rematch might have been in order. Instead, Crawford will surely move on in search of greater challenges. The promoter of Crawford’s next fight is far less certain.

All his title fights have been promoted by Top Rank, and he has made tens of millions of dollars with Bob Arum’s company. His greatest payday arrived Saturday, a guaranteed $6 million in his biggest fight yet. But his long-term contract with Top Rank is now expired, and there will surely be plenty of suitors.

For now, Crawford can soak in the adulation of his greatest victory to date, and he did so by dancing in the ring with his mother, Debra, as the crowd roared its approval. Canelo Alvarez remains the best fighter in the world pound-for-pound, but if Crawford can entice more top boxers into the ring, he might catch him soon enough.