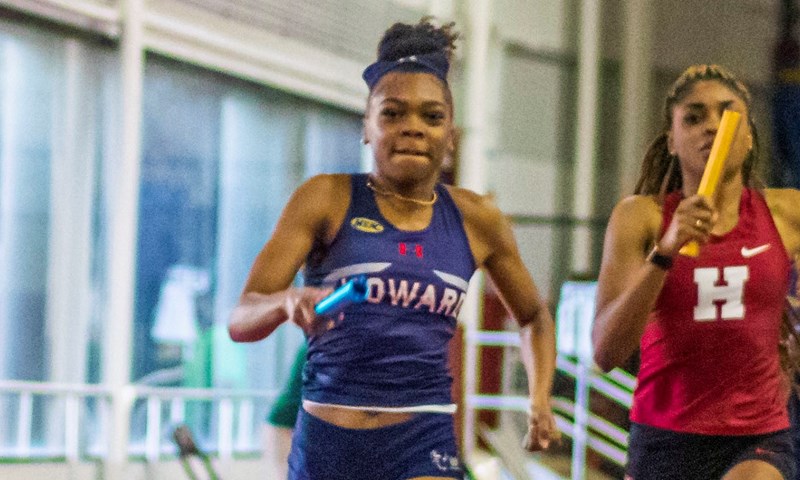 Howard University women’s track & field put on a dominant performance at the Wesley Brown Invitational, hosted by the Navy Midshipmen.

Overall, the Bison had six first-place finishes in Annapolis.

On the men’s side, freshman Chase Drewery led the way by winning the triple jump, leaping nearly 49 feet (14.87 meters).

Kai Cole continued his stellar indoor season with a huge PR in winning the 60-meter dash on Friday at the Penn State National Open.

Cole, the reigning MEAC Track Athlete of the Week, won the 60 meters for the second straight week. This time, he broke 6.70 for the first time in his career, clocking a 6.69 in the finals. The time is tied for the fastest in the MEAC and 30th nationally after the weekend.

Cole followed that up with a runner-up finish in the 200 on Saturday (21.38), leading a strong weekend for the Spartan sprinters.

Indya Richards and Malika Pride and both recorded a pair of top-five finishes to highlight another strong showing for the Norfolk State women. Richards set personal records in both of her events, while Pride lowered her season-best time while placing second in the 400 meters.

Jeff Hammond took gold in the long jump while shattering a school record and Joseph Manu won the 60-meter dash to lead the Coppin State men’s track & field team to an impressive showing at the Carolina Challenge, hosted by the University of South Carolina on Friday and Saturday.

For the women, Shenelle Tomlinson and Jahmei Wyatt turned in top-10 finishes and made up half of the 4×400-meter relay team that took fourth overall.

Bulldog sprinter Waddell Rembert-Jett established two personal records at the event, finishing sixth in the 60 meters in a time of 6.77 — the fourth fastest time in school history — while recording a 10th place showing in the 200 meters with a time of 21.76, the school’s fifth fastest time ever.

North Carolina Central track & field earned 10 top-10 finishes in the Eagles first competition since the turn of the new year, including a high jump victory by senior Marvin Jones, at the JDL Flat is Fast Invitational on Sunday.

Seven of the 10 best performances for NCCU occurred in the field events. Jones leaped 2.08 meters to win the men’s high jump, while freshman Brendan Finger placed eighth in the same event with a 1.88-meter mark. Senior Xavier Lenear captured ninth place in the men’s weight throw with a 13.28-meter toss.

The women’s unit had three individuals place in the top-10 of the women’s triple jump. Senior Zinzili Kelley finished third with a 11.31-meter effort, while freshmen Taylor Small and Anyae Lindsay placed fourth and eighth with 11.30-meter and 10.93-meter jumps, respectively.

The Delaware State University men’s and women’s indoor track & field teams competed in the Villanova Invitational held at the Ocean Breeze Athletic Complex over the weekend.

This page will be updated when more information becomes available.

7:35 AM ETAssociated Press The Professional Fighters League agreed to a multiyear deal and an expanded platform with ESPN --…