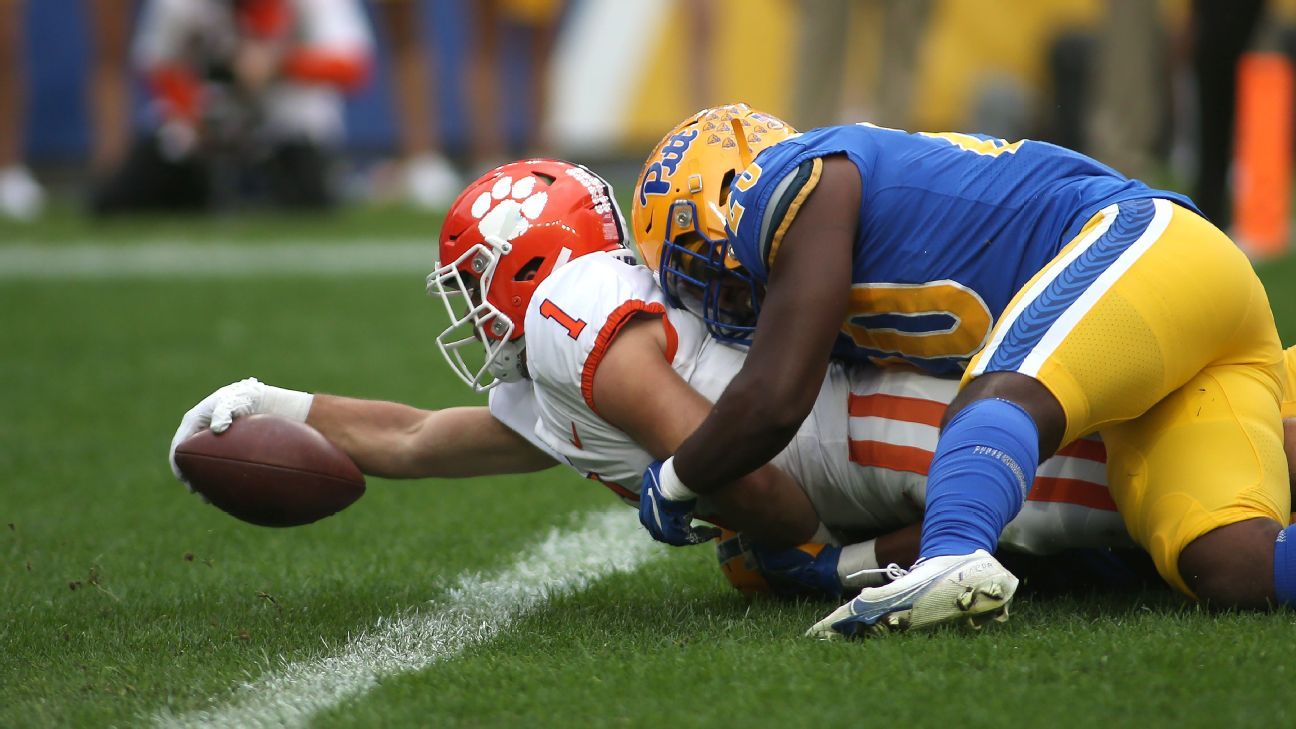 The ACC did not exactly have a banner campaign in 2021, missing the College Football Playoff for the first time while failing to finish with a team ranked in the top 10 after Clemson posted its most losses since 2014.

All eyes will be on the Tigers once again to see whether they regroup to carry the flag for the conference. But beyond Clemson, this should be a much stronger conference top to bottom than in years past. Ten of 14 teams return their starting quarterbacks — although Wake Forest, the defending Atlantic Division champion, was dealt a tough blow when it announced Sam Hartman will be out indefinitely with a non-football-related medical issue. In the Coastal Division, optimism is high at Miami under first-year coach Mario Cristobal, who returned home to the Hurricanes to revitalize a program that has never won an ACC championship.

No matter what happens, this will be a year for the record books — as the final season of the conference having divisions.

1. Does Clemson return to form?

Despite missing the playoff last season, Clemson still won 10 games for the 11th straight year — only the third program in history to accomplish such a feat. While that is an incredible achievement, the bar has been raised in Clemson after six straight playoff appearances. But more than that, the bar for offensive performance has been raised, and what happened in 2021 simply failed to meet expectations. Quarterback D.J. Uiagalelei was not consistent enough, and neither were the receivers or the offensive line. Uiagalelei returns as the starting QB — and the largest focus both on the Tigers and in the conference should be on him and whether he can fulfill his potential. If he doesn’t, what should be one of the best defenses in the nation might not be enough to get Clemson back into the playoff.

2. What does Miami do in Year 1 under Cristobal?

There is one storyline that is undefeated year after year in the ACC: Is this the year Miami will compete for a championship? Media voters seem to think so, as they selected the Hurricanes as the preseason choice to win the Coastal Division and advance to the ACC championship game. Of course, this is the sixth time Miami has been the preseason choice; the Hurricanes have one division title in their history. This year, the expectations are high thanks to Cristobal and the return of quarterback Tyler Van Dyke, who emerged last season after going through camp competing for the backup job. Cristobal has hired himself an elite staff, adding to the expectation level outside the program. But Cristobal wants nothing to do with where people think his program should be right now. He just wants his players focused on getting better.

3. Who emerges as the top quarterback in the league?

You have to go back to 2016 to find a quarterback group as deep, talented and experienced as the one in the ACC. Hands down, this is the best collective group of talent in the country, although losing Hartman from the mix right from the start is tough. He finished second in ACC preseason player of the year voting to NC State quarterback Devin Leary, the top choice after throwing for 3,433 yards, 35 touchdowns and five interceptions in 2021. Brennan Armstrong at Virginia ranked No. 2 in the nation in total offense (4,700 total yards), Hartman ranked No. 9 (4,591) and Louisville‘s Malik Cunningham ranked No. 14 (3,971). Then there are Uiagalelei, Van Dyke, Phil Jurkovec at Boston College and Jordan Travis at Florida State to keep an eye on, as well. No matter who ends up as the top quarterback, this group is going to make it fun to watch.

The 2021 season represented a seismic shift in power in the ACC, with Pitt and Wake Forest playing for the league’s title — just the third ACC championship game in league history that didn’t include Clemson, Florida State or Virginia Tech and the first since 2006. So, does that mean an official changing of the guard for our 2022 Power Rankings? Ah, not so fast. Clemson remains the most talented team in the conference, but what’s clear from last season is that the Tigers have some real question marks, and the rest of the league has some genuine threats too.

It’s been more than a decade since the Backyard Brawl was last played — back when Pitt and West Virginia were members of the Big East. The rivalry gets renewed on a Thursday night to kick off the 2022 season, and all the vitriol that’s been building up since 2011 can finally be unleashed on the field. Pitt holds the all-time lead in the series 61-40-3, but West Virginia won the past three, including a 21-20 thriller in 2011.

Florida State has spent the past five seasons in misery, but a win in a high-profile game like this could serve as an official coming-out party for the Seminoles, announcing to the college football world that they should be taken seriously again. The same might be true for LSU, which gets to play in its backyard in New Orleans and gives new coach Brian Kelly his first test. Kelly’s Notre Dame team narrowly escaped FSU in overtime a year ago.

Is Miami back? An offseason of makeovers — including a new athletic director in Dan Radakovich, a new head coach in Mario Cristobal and a new dedication to investing in football — have Hurricanes fans dreaming big. Cristobal had some serious renovation work to do upon arrival, but he has a star QB in Tyler Van Dyke, and the Canes did finish last season by winning five of their last six games. A win over a likely top-10 Texas A&M would be a huge statement — for Miami and the ACC.

NC State has spent its share of time on the periphery of contention in the ACC Atlantic, but this offseason has been filled with more hype than any in recent memory. Can coach Dave Doeren, QB Devin Leary & Co. finally deliver amid high expectations? There will be plenty of tests along the way but none bigger than this October showdown with Clemson, which could mark an official changing of the guard at the top of the conference.

Clemson and Notre Dame have played some epic games in recent years, from the Tigers’ fending off a late 2-point try amid hurricanelike conditions in 2015 to Notre Dame’s come-from-behind win against Uiagalelei & Co. in 2020. This year’s game has the makings of another classic, with both teams entering the season with legitimate playoff hopes.

For our all-conference team, we decided to add an extra defensive back, a nod to all the units playing with a nickel more often than not. If only we could add an extra quarterback or two too, this exercise would’ve been much easier. Picking just one QB from the league’s wealth of riches — Tyler Van Dyke, Devin Leary, Brennan Armstrong and Sam Hartman among them — was an impossible task. Luckily, we get a full season to enjoy the whole lot of them in 2022.

Enjoy some of the top rushes from Indiana's 2020 football season. #IndianaHoosiers #NCAAFootball SUBSCRIBE to Big Ten Network on YouTube…

LeMahieu dealing with toe issue, to have MRI