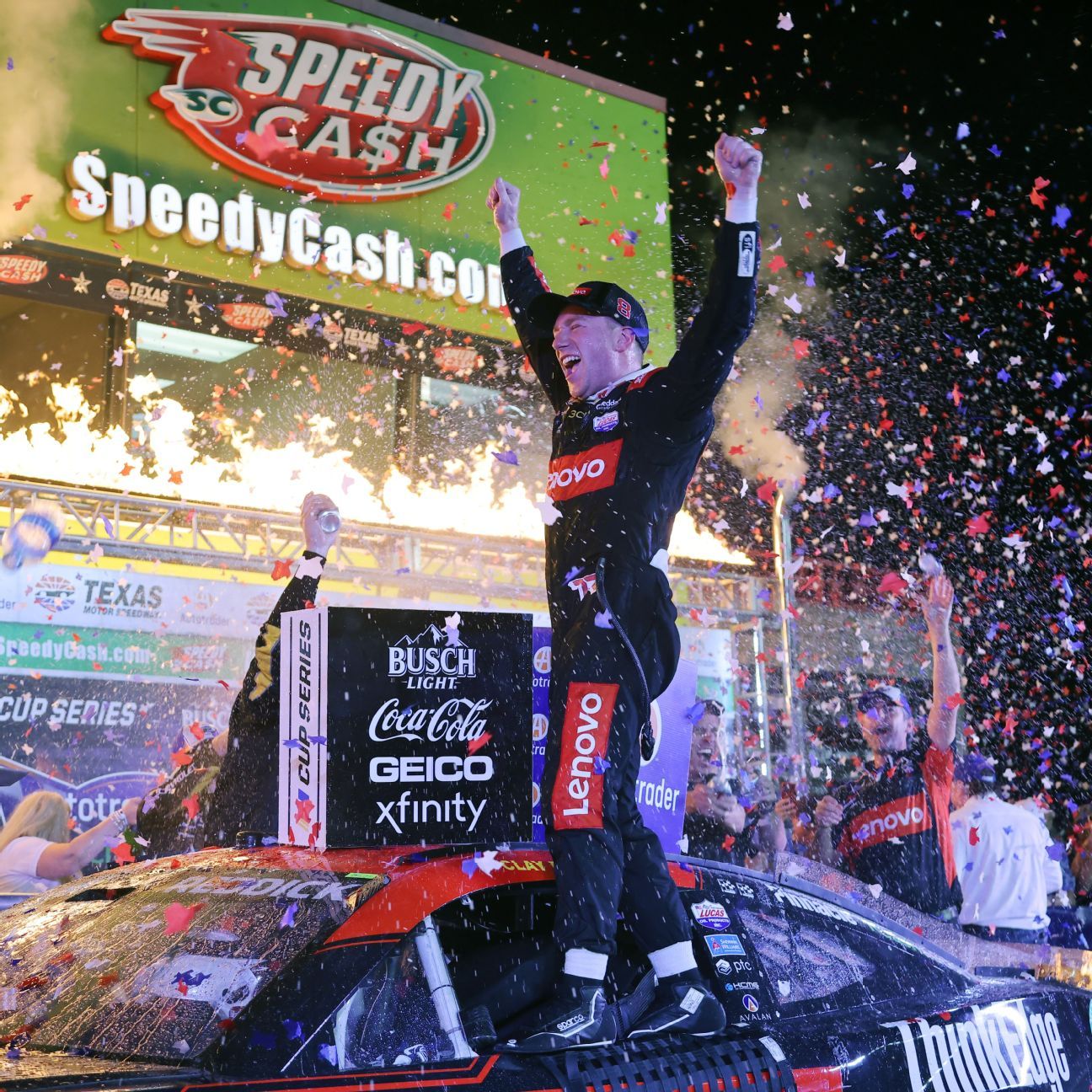 FORT WORTH, Texas — Tyler Reddick opened the round of 12 in NASCAR’s playoff with a victory at Texas on Sunday, winning a week after being one of the first four Cup drivers knocked out of title contention.

After none of the contenders won the first three races of the playoffs — a first in any round in this postseason format — the trend continued with the eliminated Reddick leading 53 of the final 54 laps on a long race day that went into the night.

Reddick finished 1.19 seconds ahead of Joey Logano at the end of an extended race that had a track-record 17 cautions, a record 36 lead changes, a 56-minute red flag for lightning and multiple tire issues leading to crashes — including playoff contenders Chase Elliott, the points leader going into the second round, and Christopher Bell.

“I was extremely worried, I’m not going to lie,” Reddick said. “Unfortunately, just about every time we’ve had fast cars, we’ve had some tire problems. That last run, the right sides were vibrating really, really hard there. … I was just trying to maximize and use the gap that I built over (Logano) just in case.”

Logano took over the points lead, by 12 over Ross Chastain.

Elliott, who entered the round of 12 as the points leader, had a fiery finish after contact with the outside wall in Turn 4 when leading just past the halfway mark of the race.

Flames were already visible from under the right side of the No. 9 Chevrolet when he got onto the frontstretch, then turned across and came to a stop in the middle of the infield, where Elliott climbed out uninjured as the car was being engulfed by flames. He finished 32nd.

“I’m not sure that Goodyear is at fault,” Elliott said. “Goodyear always takes the black eye, but they’re put in a really tough position by NASCAR to build a tire that can survive these types of racetracks with this car. I wouldn’t blame Goodyear.”

Non-playoff drivers Kevin Harvick and Martin Truex Jr. also had tire issues when leading the race at the 1 1/2-mile track.

Bell, the Oklahoma native who considers Texas his home track, couldn’t recover from a second tire issue that led to his race-ending crash after finishing only 136 laps. He was the only driver to finish in the top five in all three races in the first round of this postseason, but was 34th at Texas.

Soon after the caution came out for Truex’s spinout from the lead on lap 268, Hamlin was sliding through the infield after Byron made contact with him from behind. When pressed after the race, Byron admitted that he intentionally did it, upset about being pushed up against the wall by Hamlin during green-flag laps just before that.

Hamlin stayed side-by-side and nose-to-tail with Byron during the caution period, livid because of the position he was losing on the track. Since he couldn’t keep pace after going into the grass, Hamlin had to restart 22nd instead of near the front.

The race was about to resume following the caution period for the end of the second stage when NASCAR ran some extra laps under caution because there was light rain falling on some parts of the 1 1/2 mile track. But when there was lightning in the vicinity, the cars were brought to park on pit road with 220 of 334 laps completed.

Drivers got a chance to get out of the cars for a break on a day with record heat. The temperatures in the upper 90s made for the hottest Cup race ever at the track that opened in 1997.

Kyle Busch completed only 48 laps and was last in the 36-car field, marking the first time in his 32 Cup starts at Texas that he didn’t finish the race.

Busch got loose when going higher up the track when getting close to teammate Hamlin.

“I went to the high groove where I was making time in the spray and the sticky stuff, but it is not so sticky apparently. I crashed,” Busch said. “I’m trying to go, trying to race. Banana peels out there for me.”

It came a week after the two-time champion was eliminated from title contention in his final season with Joe Gibbs Racing before going to Richard Childress Racing. Busch finished 34th at Bristol after an engine failure just past the halfway mark of the race.

Cody Ware’s car went nearly nose-first into the safer barrier on the outside wall in Turn 4, and then shot down the track and onto pit road. There was then an even bigger hit when the car slammed hard just past a cutout in the pit wall.

Ware escaped serious injury, even though he was put on a stretcher and into an ambulance after first being tended to for several minutes after getting out of the car. He was taken to the infield care center, where he was treated and released.

His team said he had some discomfort in his ankle, but no broken bones.

The middle race of the second round of the playoffs is Sunday at Talladega.

Prithvi Shaw has earned a recall to the Indian Test team.© AFP Prithvi Shaw and Suryakumar Yadav have been added…