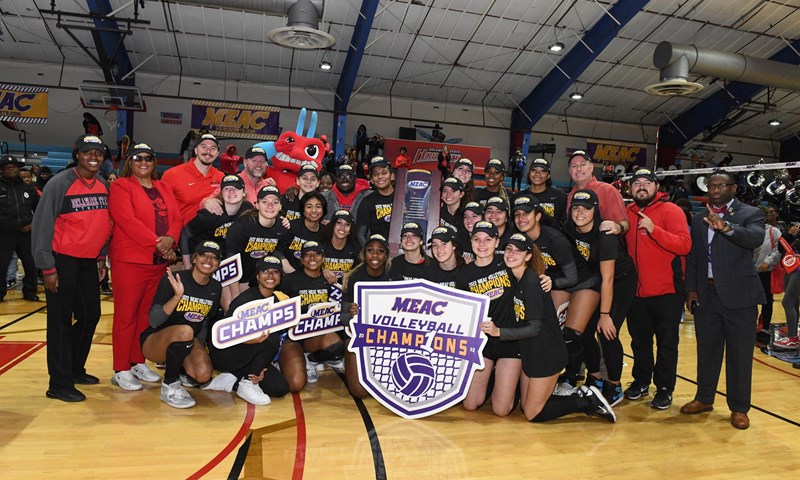 – For the first time in nearly four decades, Delaware State is volleyball champion of the Mid-Eastern Athletic Conference (MEAC).

The third-seeded Hornets defeated top seed Coppin State 3-1 (25-11, 19-25, 25-15, 25-16) in a raucous Memorial Hall Gym Sunday evening in front of a live ESPNU audience to win their first tournament title since 1986 and their first-ever NCAA Championship bid.

The Hornets’ Alondra Maldonado, who was named the tournament’s Outstanding Performer, led the way with 15 kills and four block assists, hitting .500 after committing just three errors in 24 swings. Valeria Otero was also in double figures with 14 kills and 12 digs.

Malgorzata Andersohn had 27 of the Hornets’ 47 assists, while Jasmal Cruz led the defense with 17 digs.

Delaware State hit .250 for the match, while holding Coppin State to just .054 hitting. The Hornets dominated at the net, racking up 11 blocks to Coppin State’s four.

With the first set opening in a 9-all tie, Delaware State ended the set on a 16-2 run, dominating the middle and latter portions of the frame en route to taking a 25-11 set and 1-0 match lead.

That momentum carried into the opening stages of the second set, as the Hornets scored the first five points and later led 6-2 after a kill from Otero. Another Otero kill moments later put the Hornets up 8-3, before Coppin State rattled off five straight to tie the set at 8-8.

A Maldonado kill later in the set cut the lead to 17-15, but the Eagles went on a 6-0 run to break open the frame and take a 23-15 lead. Sydney Lewis racked up three straight kills to cut the lead to 23-18, but Coppin State scored two of the last three points to take the set at tie the match at 1-1.

Coppin then opened the third set on a 5-1 run after an Ashley Roman service ace, before Delaware State scored the next six points and took a 7-5 lead on a kill from Karen Cordero. Another Cordero kill a few rallies later put the Hornets up 10-6, before the Eagles scored the next three to cut the lead to 10-9.

Ammaarah Williams cut the lead to 12-11 with a kill, before the Hornets answered with a 6-1 spurt to take an 18-12 lead. The Eagles got to within 19-14, but Delaware State closed the third frame by scoring six of the last seven points, winning 25-15 on a Danielle Allen kill.

Delaware State then jumped out to a 6-2 lead to open the fourth set, well on their way to avenging 2021’s four-set championship final loss. Allen and Lewis paired on a block that gave the Hornets an 8-3 lead, before Coppin State went on a 6-1 run to tie the set at 9-all.

Williams and Andrea Tsvetanova then paired on a block to tie the score at 10-10, before the Hornets opened things up with an 11-2 run to take a 21-12 lead.

When Lewis nailed the final kill, the Hornets took the set and the match and trigger a massive celebration.

A glimpse at Lashay Holt, Humboldt's 5'10" senior forward who has lit up the stat sheet in recent years. To…

10:22 AM BST England captain Owen Farrell is a doubt for their match against Tonga on Saturday after returning a…

'Must Ensure There Is A Lot More Context In Bilateral Series': Kane Williamson